The ‘Sweat and Swearing’ of Writing. 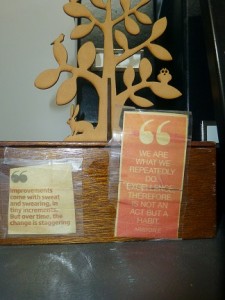 Around four years ago I decided to try my hand at writing. I was terrified.

What if I sucked? What if I was about to waste precious spare time on a pipe dream?

There were so many ‘what if’s’ I nearly didn’t write a single sentence.

So when I saw this quote in the paper I quickly cut it out, plastered it in strips of sticky tape to stop it from going yellow and stuck it next to my computer.
Over the months and years that followed this quote became my mantra:

“Improvements come with sweat and swearing, in tiny increments.
But over time, the change is staggering.”

In the four years since I stuck up that quote I have been hard at The Work of writing. But without the sweat and the swearing I would still be stuck wondering ‘what if?’